War is A Racket 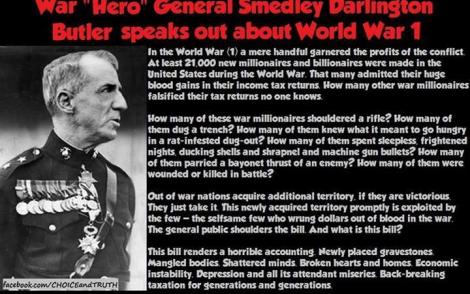 General Smedley Butler was a highly decorated Marine General from the early part of the 20th Century. He wrote his famous book in 1935. In it he argued that war, all wars were really about money nothing else. He pointed out that the big bankers like Rothschild regard war as a great business cause they loan money at high interest to both sides. It is also highly profitable for the manufacturers of war materials cause they sell their wares the governments involved also at high prices. The governments have no choice but to pay the price cause they need the war materials. In the end, only the rich businessmen benefit from war. The poor soldiers who have to fight the wars only get killed or badly injured, mentally and physically, from the war. And don’t worry about America being attacked. General Butler explains why that is a practical impossibility. In his view the only good reason to even have a military is to protect the borders. That’s it. General Butler’s book is a short easy read and is available on many book sellers’ web sites as well as in Kindle. It is the best anti war book ever written and is written by an expert with unassailable credentials.

War is a very nefarious and profitable Business for the Federal Reserve and they should be shut down and thrown in Gaol for life for being an Associate to Mass Murder and Mass Human Rights Abuses.....Sally-Anne Robbins