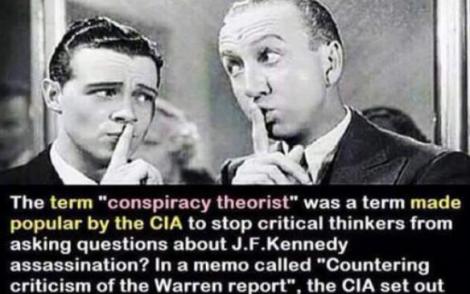 This term is a brainwashing technique in and of itself. It was invented by the CIA to discredit anybody who doubted the conclusions of the Warren Report on the JFK assassination. People who don't want to consider some idea throw the term glibly about think int makes them look smart and wise when, in fact, to the discerning observer it makes them look stupid and brainwashed. Why is it a brainwashing device? Because it makes an a seeming connection between the term "conspiracy" and the term "theory" without ever showing evidence that they are connected and without showing any logical connection either. So people throw the term at you and think they just dismissed your idea. They won't do any research about it nor will they entertain any argumentation to the contrary of what they believe. So more discerning thinkers just leave it alone knowing that if you argue with a fool, it just makes you look ridiculous in the process.